I could write just about the symbolic red of Mariana’s dress – such is the richness and potential for interpretation in Pedro Costa’s Casa de Lava (1994). Storming around Cape Verde with either a forthright, potentially desperate intent or equally desperate aimlessness, Mariana (Inês de Medeiros) appears a figure of life, potency and sheer bloody will. Towards the end of the film Mariana changes her clothes, adopting more neutral attire and seeming to calm internally too. Colour is used to startling effect throughout the film, in many cases where Costa’s compositions involve a single character framed within a scorched, dramatic landscape.

Costa’s second feature following the monochrome Blood (O Sangue, 1989) is a ‘remake’ of Jacques Tourneur’s I Walked with a Zombie (1943) and frequently cited as alluding to Rossellini’s Stromboli (1950). Construction worker Leão falls on site and becomes comatose, then, in a very concise piece of expository dialogue, the doctor announces that a letter and a cheque have been sent from Leâo’s village, he’s being discharged and will be sent on a plane back home. Nurse Mariana accompanies him from Lisbon to Cape Verde and on arrival attempts to ascertain her patients origins, but is met with denial or silence. A stranger in an unfamiliar land, Mariana’s presence is neither welcomed nor met with hostility, rather a questioning insight that seems to reveal to Mariana more about herself than she is willing to accept. 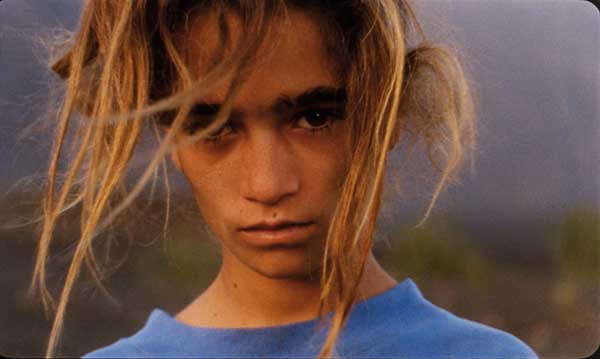 Violinist Bassoé (Raul Andrade) recounts his sorry tale to Mariana admitting that he has many sons, but is vague when questioned on whether Leão is one of them. Finding her equivalent in Edith, a white woman who arrived years ago and simply never left, Mariana is once again left frustratingly non-the wiser by Edith’s refusal to speak. The refusal, or denial as Jonathan Rosenbaum (who provides the booklet essay for the DVD release) puts it, is the locus of the film. Despite the sometimes perfunctory explanatory dialogue, the bulk of interactions have an ambiguity that hints towards many things and many interpretations, with plot points left unresolved and character motivation in doubt. Mariana is herself in denial about the purpose of her stay on the island, it seeming to go beyond the initial week she supposed without her noticing. At once a musing on colonialism and the notion of the individual within a community, this obliqueness of plot is characteristic of Costa’s filmmaking, the trajectory of which has been described by critic Peter Bradshaw as ‘one of the most fascinating in modern cinema’.

Indeed Costa’s films are highly celebrated but hard to access, none of them having had a UK release beyond individual screenings. Lucky for anyone able to get to the ICA in London this Sunday 30th for a special screening of Casa de Lava in collaboration with Second Run DVD. Costa himself will be in attendance for a Q&A with EIFF’s Chris Fujiwara.