After a week in which I didn’t manage to see any non-submission films (due to leaving the house, actually) the prospect of Terrence Malick’s second film in 18 months was enough to fuel my sense of urgency. Following 2011’s The Tree of Life (2011) which saw Brad Pitt and Jessica Chastain struggle to find harmony whilst raising three boys in 1950’s Texas; intercut with gloriously bonkers visuals musing on the origin of life, To the Wonder also tackles grand themes via an ostensibly domestic, romantic narrative. 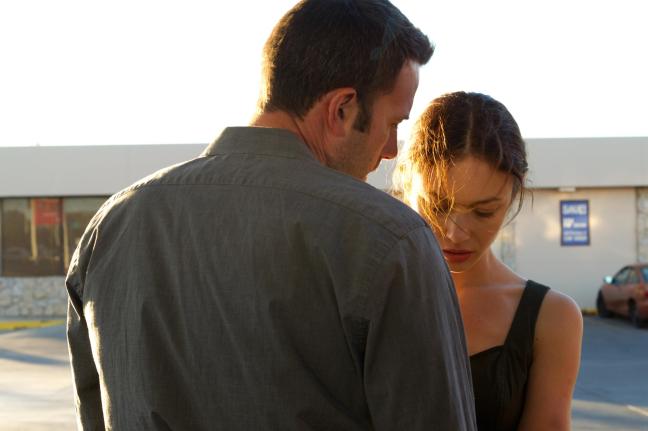 Neil and Marina (Ben Affleck and Olga Kuylenko) are first seen enjoying the bliss of new love, living in France. Deciding to relocate to the US, they move, along with Marina’s daughter Tatiana (Tatiana Chiline) to a new build housing estate in Oklahoma. When Neil is reluctant to marry Marina, she returns to Paris leaving Neil alone, and for a while he becomes involved with a childhood friend, Jane (Rachel McAdams). When Neil and Jane break-up due to his emotional unavailability, he marries Marina who returns to the US without Tatiana; but the same anxieties persist for them both. Parallel to this, Father Quintana (Javier Bardem) – whom Marina confides in – also experiences a crisis of faith despite his ties to the local community.

This synopsis might suggest that between the characters, complex feelings and concerns are expressed – and indeed they are – but Malick eschews a reliance of expression through verbal communication, instead allowing only fractions of dialogue to be audible, as though the audience is eavesdropping on intimacy. In fact, Neil is almost never heard speaking, aside from a few French phrases and snatches of reserved sentiment offered to the two women in his life. Instead the oral offering comes in the form of voice-overs from Marina and Jane who describe their feelings for Neil and inner longings. This mainly non-verbal, more gestural depiction of human relationships might sound like an antidote (whether welcome or not) to the kind of fast-paced riffing seen in Silver Linings Playbook, or even the schizophrenic Friends with Benefits – if the Hollywood rom-com is your kind of thing – but Malick’s almost total lack of subtlety in employing such an artistic choice results in almost non-characters; unreachable ciphers standing in for man and woman. The distancing effect can also be attributed to repetitive scenes in which Neil follows Marina or Jane through fields and across beaches or gardens – and I couldn’t help thinking of these as analogous to the experience of the viewer; chasing Malick’s plot and his characters endlessly and never getting anywhere.

This is not to say that there aren’t things to enjoy about the film. Its beautifully shot by Malick’s cinematographer Emmanuel Lubezki (since The New World in 2005), which in scenes involving Father Quintana visiting his flock – reveal beauty and experience in the faces of the Oklahoma residents. As a Malick fan however I couldn’t help feeling that with The Tree of Life and To the Wonder, the director is working through ideas in a rush, that perhaps needed another five or twenty years of distillation before making their way to the screen.

If you’re interested in a more positive take on To the Wonder, Guy Lodge loves it and describes why quite elegantly, here.