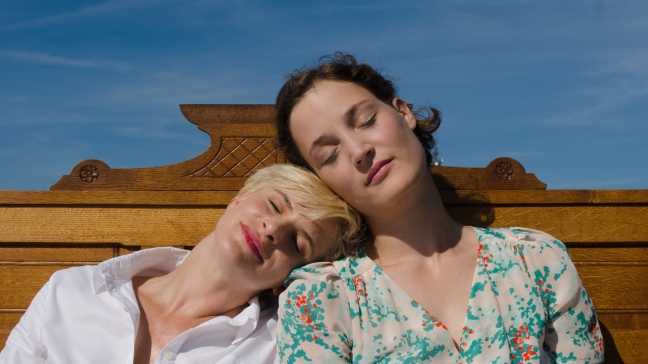 Approaching his adaptation of Markus Orths’ novel, director Ingo Haeb knew that he couldn’t take the narrative of a cleaning-obsessed chambermaid only at face-value; ‘’it was clear that it was a modern, adult, fairy-tale’’ says Haeb. Whereas the novel presented the experience of Lynn plainly, without any doubt as to the actuality of her experiences, when envisioning the source as a more ambiguous, cinematic work, for Haeb; ‘’the distance between the audience and the character is gone, so I wanted to keep it open.’’

The Chambermaid Lynn follows its titular heroine as she goes about her weekly routine, working at the Eden Hotel cleaning the rooms with a fastidiousness that outstrips the efforts made by the other chambermaids. Lynn (Vicky Krieps) is fascinated by the lives of the hotel’s guests, and examines the remnants of their lives – clothes, books, etc. that they leave behind when they go out. One day hiding under the bed to avoid detection, Lynn is immediately hooked on another aspect of one guest’s life, when he hires dominatrix, Chiara (Lena Lauzemis). Having compartmentalised her sexual life, much like work, exercise and cleaning, Lynn is desperate to know what it would be like disrupt the order that she has created, and so makes a date with Chiara too.

Visualising Lynn’s world involved meticulous planning by Haeb, who focused on the smallest details, such as the colour of a telephone, or the way Lynn’s hair is parted, in order to convey the structures that the character has put in place in order to go unnoticed, which meant that for the production design; ‘’everything becomes important.’’ This careful approach also extended to making sure the audience could understand the origin of Lynn’s obsessiveness, through the relationship with her mother (Christine Schorn). To do so, Haeb consulted a psychologist/philosopher, who could advise what kind of maternal relationship would produce Lynn’s particular coping methods, and her attitude to sex – says Haeb; ‘’with this kind of mother, she [Lynn] would have the psyche that ‘I never had sex, but sex is done to me’.’’ Such an important relationship becomes key to understanding Lynn’s initial reticence when attempting a less passive approach to intimacy with Chiara.

Far from being the familiar story of a sexual awakening however, The Chambermaid Lynn is successful in showing the shifting power dynamic between Lynn and Chiara. For someone for whom sex is simply a perfunctory activity, it is feeling at all – rather than feeling for a woman – that is important. Says Haeb; ‘’this is not a coming out story’’ rather, Lena was cast as Chiara for her androgyny, having neither the particular energy of a man or a woman; ‘’she’s neutral [to Lynn].’’ While Lynn begins to gains confidence in the new feelings she’s experienced, for Chiara, her feelings – and Lynn’s – make her vulnerable. Plunging into something new is all part of human nature for the director however, and though we see Lynn grow and take risks in the film, for Haeb; ‘’getting what you want and going too far’’ is inevitable.

One thought on “IFFR 2015: The Chambermaid Lynn, interview with director Ingo Haeb”