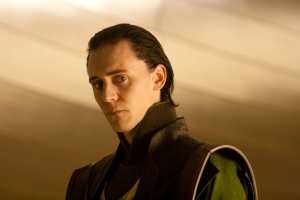 Inspired by the effervescent Avengers Assemble, I sought out Thor (2011) for another watch to compare the tone of Branagh’s earlier effort with Whedon’s spot-on get-the-gang-together adventure. As with Avenger’s Assemble, one of the main pleasures of Thor is Tom Hiddleston’s demi-God Loki, brother to our titular hero. Hiddleston is deft at combining the pathos of Loki’s identity crisis, with the camp of a truly despicable villain, and in Thor his origin story is well worth revisiting, even if the more spectacular action set pieces are confined to realms other than earth, leaving Thor and his comrades battle with Loki’s metal man henchman seem a little underwhelming.

David Cronenberg is a director I’ve shied away from mainly due to my irritation with eXistenZ (1999), which seemed to belabor its point somewhat, however having finally seen The Fly (1986) and caught up with come more recent work, A History of Violence (2005), and Eastern Promises (2007), my irritation has lifted and I’m certainly trying to see more. With that in mind I watched A Dangerous Method (2011), which looks at the relationship between Carl Jung (Michael Fassbender) and Sigmund Freud (Viggo Mortensen), a

nd the battle for morality and ethics in the birth of psychoanalysis, as represented by Jung’s torment at this relationship with a patient, Sabina Spielrein (Keira Knightly).

The key Cronenberg concerns are all present – sex, the death drive, the mind/body divide, an emphasis on the corporeal – making this perhaps the perfect subject for the director, and none more perfectly expressed than in Knightley’s committed performance, her body contorting in a pure expression of mental anguish.

In Blue Ruin, a man seeks vengeance for the murder of his parents on the day their killer is released from prison, leading to a bloody series of retaliations, a form of justice kept ‘in house’ and away from the police. The immediate aftermath of Dwight’s (Macon Blair) somewhat calamitous yet shocking first kill sees him come face to face with the innocent quotient of his enemy’s clan, in a moment of pathos-filled humour, in which Dwight is required to release a passenger from his unplanned escape vehicle, and is given the first hint that his side of this story is not the only great tragedy at stake. Director/writer/cinematographer Jeremy Saulnier establishes a suitably sticky atmosphere, as the heat of the Virginia forests seems to emanate from the image of each blood-soaked character. Blue Ruin won the FIPRESCI International Critics prize in Cannes 2013 and it’s easy to see why – Saulnier here achieves a pure clarity of character, plot and form that draws strength from being both terrifyingly simple and artfully realized.

With Jane Campion’s Golden Globe winning Top of the Lake (2013), murder or the threat thereof is also the driving force of a plot that has Elizabeth Moss’s Detective Robin Griffin return to her home town, ostensibly to visit her dying mother, yet pulled into a rape investigation when a pregnant 12 year old attempts suicide in the titular Lake Top. Issues of gendered power plays are at the heart of this stellar mini series, as Robin’s status as a lone female sees her subject to forms of male protection both welcome and unwelcome, an inappropriate marriage proposal, threatening displays of violence, psychological manipulation and name calling, whilst other women seem to have varied experiences of the same enforced passivity at the hands of local land-owning alpha male, Matt (Peter Mullan).

Whilst Robin searches for Matt’s runaway daughter Tui (Jacqueline Joe), a camp sets up at Paradise, the lakeside land sold from under him by business partner Bob Platt, and a group of women move into storage containers, under the guidance of GJ (Holly Hunter). Although GJ professes not to teach or impart wisdom – only the ‘the body knows what to do’ all the characters of Top of the Lake are drawn to her at some point, whether seeking help, shelter or a chance to offload anger and fear – represented by one male onlooker that directly questions the specificity of her gender.

Showcasing the New Zealand landscape as a site of astonishing beauty and acute danger, Campion creates an atmosphere that never allows the viewer to assume the worst is over, as Robin’s investigation reveals inextricable links between her own past and present self.

Finally, my viewing this week ended on lighter notes, with a double bill of Captain America: The Winter Soldier (Anthony & Joe Russo, 2014) and The Amazing Spiderman 2 (Mark Webb, 2014). I thought Captain America: The First Avenger (Joe Johnston, 2011) a terrible bore of a film – due mainly to the unimaginative direction (but then what was I expecting from the director of Jurassic Park 3?) so helpfully my expectations were low, and this new, post Avengers, ‘Phase 2‘ iteration of the Steve Rogers story proved engaging, delightfully silly and earnest only when it mattered most. Action scenes involving Scarlett Johansson’s Natasha Romanoff aka Black Widow maintained the excellent standard of choreography for this character that began with Iron Man 2 (John Favreau, 2010) with the kind of fighting style that believably demonstrates how a woman of Romanoff’s strength and size can immobilize swathes of henchmen. 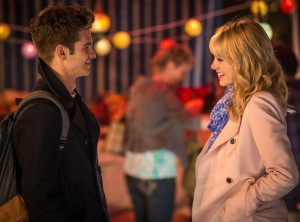 Emma Stone was also given ample space to show strength and characteristic intelligence as Gwen Stacy – saving Spidey’s (and the rest of New York’s) life in The Amazing Spiderman 2, which puts the romance between Peter and Gwen at the centre of the film. Though Andrew Garfield as Peter was once again the perfect, sinewy, athletic Spidey, I was left with a sense that his world is less tangible than that of the Avenger’s and its respective solo ventures in the series – despite also being a Marvel title. Perhaps it’s due to every villain so far having originated in that comic book cliché of accidental merge with toxic animal/goo/experiment gone wrong in the Osborn lab, or maybe Amazing Spiderman 2 failed to exploit the potential of any one of its villains, instead settling for broadly painted caricatures doing little justice to the caliber of the actors playing them. Nevertheless, Stone and Garfield are a sheer joy to watch, being that rare example of sizzling on-screen chemistry.

Coming next on My week in film… In cinemas I’ll review Frank, and at home – an as yet unknown plethora of film from around the world.