I’ve been catching up on my horror viewing recently, mainly inspired by Halloween and the glut of recommendations that appear at this time of year. The Shining was amazing, Teeth (Mitchell Lichtenstein, 2007) was camp and creepy, Mary Harron’s American Psycho (2000) was even better the second time and Carrie (Brian De Palma, 1976) was dreamy and sad, though somehow not as wicked as I imagined it would be.

On Halloween night, I saw Guillermo del Toro’s latest film, Crimson Peak, starring Mia Wasikowska as Edith Cushing, an aspiring writer who falls in love with Tom Hiddleston’s mysterious Sir Thomas Sharpe, and goes to live with him and his sister, Lucille (Jessica Chastain) in their enormous, run-down, gothic home. Edith is interested in ghosts, having been visited by her mother’s when she was a child. Her fascination with restless spirits makes her a much more proactive protagonist than those usually found in haunted house films, and gives her a plausible reason to be wandering all over the house actually looking for spooks, rather than run away screaming (which is what I would be doing).

Thomas and Lucille have a secret, and del Toro and co-writer Matthew Robbins’s screenplay lets us know this from the outset, as we see Edith’s father become the first victim of knowing too much. Unravelling the plot becomes very easy in the end, as Edith investigates her new home and, as in Hitchcock’s Notorious, is suspicious of the endless tea Lucille offers her to drink. Plot predictability doesn’t seem to be the point of Crimson Peak’s pleasures however, as del Toro signifies danger and horror so liberally that it’s apparent he just wants his audience along for the ride. The blood red clay upon which Thomas and Lucille’s house is built, the large hole in the roof through which leaves and later, snow falls, the myriad dark corridors, and cellar full of padlocked pits, all this contributes to the very effective atmosphere of dread.

The film looks fantastic, with Kate Hawley’s costume design, Jeffrey A. Melvin and Shane Vieau’s set decoration and Dan Lausten’s cinematography creating a brilliantly realised romantic, gothic look. Doug Jones, a frequent collaborator with del Toro (Hellboy, Pan’s Labyrinth etc.) here plays two of the ghost characters, including Edith’s mother, bringing a tangibility to their presence and capturing their discomfort and distress. It’s perhaps not as effective as the aforementioned Pan’s Labyrinth due to the lack of surprises, but there’s nevertheless a believable female character again at the heart of del Toro’s film, making it one of my preferred horror tales this Halloween.

Did you notice there’s a Bond film on release at the moment? Director Sam Mendes’ Spectre again stars Daniel Craig as 007, attempting to uncover the mastermind behind an evil international organisation. Léa Seydoux also stars as Madeleine Swann, daughter of Mr White (Jesper Christensen), seen previously in Casino Royal (2006) and Quantum of Solace (2008) and she brings an emotional depth to role of Bond’s female partner that’s not been this effective since Eva Green’s Vesper Lynn. Spectre builds on certain classic bond elements that were re-established in Skyfall (2012), such as Q’s (Ben Whishaw’s) gadget workshop and Moneypenny (Naomi Harris) and adds more in too, moving the plot towards a character reveal that’s somehow both satisfying and lazy. There are some dynamic and elegant action set-pieces and beautiful costuming (because one must always look impeccable whilst grappling with henchmen and chasing down clues) but Spectre is ultimately just a Bond film – a cinematic institution with as many inventive twists as laboured spy clichés.

‘Maybe when we indulge the things that scare us, we stop being victims of fear and become co-conspirators.’

Do we get that control back, when we watch scary films? Is our fear manageable when we’ve volunteered to feel it? Director/writer/editor Charlie Lyne’s latest film, Fear Itself, like Beyond Clueless (2014) before it, takes a film genre – this time the horror film – and examines what draws audiences towards that which scares them. Using dozens of examples, classic (Night of the Hunter) and cult (Tetsuo: The Iron Man) alike to build a picture of the familiar themes and imagery that horror films seem to use endlessly to draw us in.

Lyne’s narrator is a woman grieving and traumatised, suffering nightmares but unable to keep from watching the scary films that then feed back into her subconscious. This narrator introduces the key questions at the core of our relationship with the horror genre, opening with the problem of predictability. Most of the time, we know exactly what is going to happen in a horror film, because we’ve seen the same thing in other horror films countless times before, and yet we allow ourselves to be manipulated.

Lyne looked at this very problem in his previous short film, Copycat, which took the form of an edited conversation between Lyne and filmmaker Rolf Kanefsky, who’s 1991 film There’s Nothing Out There included a character savvy to the tropes of the horror film, who helps his friends to survive an alien attack. Kanefsky’s attempts to get the film wider recognition put him in contact with one Jonathan Craven, leading to his speculation that Scream (1996) and specifically the character Randy Meeks (Jamie Kennedy) might have a little too many similarities to There’s Nothing Out There, to be a coincidence.

Scream is not one of the films referred to in Fear Itself, but the subject of horror movie clichés and our willingness to be scared is present in the film, though explored in more depth. One concern examined is how horror films relate to real life murder cases, which then become the source for film adaptations. Taking Gus Van Sant’s Elephant as one example, the narrator ponders the much reported on influence that violent films supposedly had on the perpetrators of the Columbine killings, and in turn, the way Van Sant’s film apparently influenced a separate murder by teens in the US. Fear Itself asks us, to what extent do we allow ourselves to be influenced by that which scares us? Was evil present in the soul of the killer before they allowed the imagery of horror films to influence them? 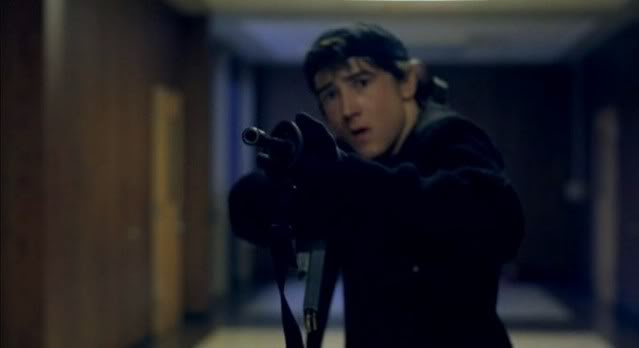 Lyne’s film poses questions with a fluidity of thought that appears effortless, moving from Hideo Nakata’s Ringu and our fascination with the unseen, to Elephant through to the frustration of viewing characters in danger, as in Bryan Bertino’s The Strangers and David Robert Mitchell’s It Follows. The result feels like a comprehensive meditation on the attraction of horror films, communicated via Amy E. Watson’s sensitive voice over, as a personal quest for relief from the torment of a death fixation. Lyne makes this investigation into fear and the movies something like a secret we’re being let in on, allowing an indulgence in questions we have no doubt asked ourselves. The catharsis we get from horror films is perhaps wrought from having a figure to project our worst fears onto, as Fear Itself’s narrator suggests; ‘we can’t bear the thought of what humanity might be capable of, so we put it down to evil instead.’

Fear Itself is available to view on BBCiplayer.