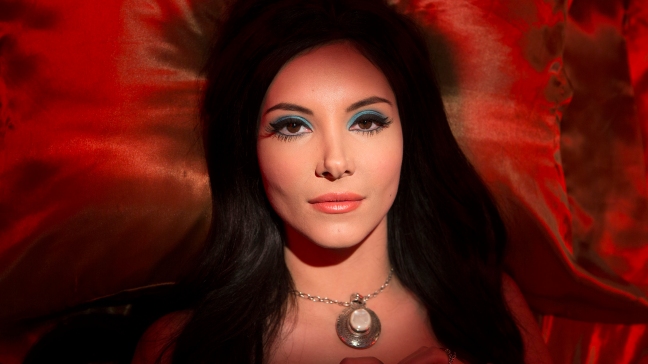 Last year, I participated in International Film Festival Rotterdam’s Trainee Programme for Young Film Critics. It was my first visit to a film festival outside the UK and it opened up a world of cinema I’d yet to see at that point. Going back this year has been a very different experience, not least of all for navigating the programme without the structure of jury screenings to attend. When faced with a programme as massive as IFFR’s, it can be daunting to know what to see. I took the opportunity to see some celebrated work by established directors (Ben Rivers, Lucille Hadzihalilovic, Laurie Anderson, and Whit Stillman) and was drawn to new work by female filmmakers considering issues of representation, compliance, gender, and sexuality.

Melisa Liebenthal’s Las Lindas, which had its world premiere screening in the Bright Future section, is an autobiographical essay film, focused on her adolescence and that of her friends, how they developed into young women and the societal expectations they felt to be attractive.

Chronicling the shifting loyalties among her school friends, Liebenthal explains how, between the ages of 9-12, she and her friend Camilla were very close, slightly apart from a group of girls they would later bond with, who referred to themselves as the ‘Little She Stars.’ The ‘Stars’ were popular, confident and close with the boys from their class. By contrast, Liebenthal states that, ‘at the age of 12 I decided to stop smiling in photographs.’ A montage of pictures attests to this, with Liebenthal seen at the beach, or a museum or with family, each time with the same half blank, half serious expression. The smile is this director’s first target for critiquing the conditioning of young women to be compliantly attractive to men. “You’re prettier if you smile” – and other persuasion tactics – are here identified as absurd but extremely effective manipulations, seen in the countless photos of smiling girls shown, that contrast with Liebenthal’s straight-faced rebellion.

It’s an entertainingly frank, clear and witty self-portrait that neatly places the filmmaker’s own experience within the context of wider issues around gender inequality, relying more on personal testimony than statistics or academic theory. Liebenthal’s willingness to expose her own insecurities, her inviting self-awareness, combined with editor Sofia Mele’s efficient handling of each sequence, make Las Lindas not just a film every teenager should see, but a thoughtful and worthy contribution to the essay-film genre.

In five years, prolific American director Nathan Silver has made six feature films and five short films. I saw Stinking Heaven at IFFR last year, where the director has been well featured over the years. That film looked at the use of role play as therapy in a communal living situation, and with his new work, Actor Martinez, Silver has teamed up with co-director Mike Ott, to take the concept of role play as far as possible. Seen in the film as themselves – or versions of themselves – Ott and Silver follow actor/full time computer repairman, Arthur Martinez as he goes about his daily life; you might call such scenes documentary. Arthur also performs as himself in scenes constructed by Ott and Silver, and the three of them hold auditions for the part of Arthur’s love interest. Actor Martinez frequently works with set ups and reveals, between what is presented as ‘document’ and what is play, even its two directors set up scenes where they read lines as themselves, playing almost Machiavellian overlords to Arthur’s life. The latter complains consistently that the experience is ruining his life, and that he no longer knows what is real and what is play, and appears to evade revealing his ‘true’ self to his tormentors, who, frustrated, push the limits of what is tolerable not only for Arthur, but for his co-star, Lindsay Burdge. What is ultimately ‘actual’ and what is constructed remains a puzzle that Ott and Silver clearly want their audience to enjoy trying to solve.

Also interested in role play, is Elisabeth Subrin’s A Woman, A Part, which had its world premiere at the festival. Maggie Siff (Mad Men, Sons of Anarchy) plays Anna Baskin, an actor who takes an abrupt leave from her successful TV role to go back to her old apartment in New York. There she meets up with two friends with whom she once collaborated in the ‘90s; Kate (Cara Seymour, American Psycho, The Knick) who is less than happy to see her, and Isaac (John Ortiz, Silver Linings Playbook) who welcomes her, but isn’t altogether honest. The three friend’s fractured relationship then becomes the film’s focus, with as much time spent on Kate’s internal struggles – showcasing Seymour’s incredible performance – as Anna’s journey back to stability. A Woman, A Part is perhaps flawed in not allowing enough of the comic moments its cast are clearly capable of delivering, but it’s refreshing to see an adult drama where the protagonist’s lives feel authentically written, they have real flaws, which mean you can’t like them all the time. Each of them is still trying to find their role, and seeing the process of them push each other is often very thoughtfully done. Still, the ending is perhaps too neat for all that’s gone before.

I saw two very different approaches to female sexuality in Nicolette Krebitz’s Wild and Anna Biller’s The Love Witch. In the former, writer/director Krebitz extracts a compelling performance from her lead, Lilith Stangenberg as Ania, a young woman who one day sees a wolf in the woods near her apartment and becomes obsessed with capturing it. Much is made of Ania’s sad and repetitive life, and her introverted personality, enhanced by a palette of grey blue and her somewhat girlish clothes, all the more to demonstrate the change that affects her when she and the wolf become housemates. There’s a level of absurdity to some sequences, notably when Ania’s sexual fantasies play out, but this seems to come more from a knowing sense of humour than unintentional clumsiness. Stangenberg’s performance remains one of conviction, and very much carries the film to its inevitable conclusion. Krebitz is playing with the theme of the instinctual, wild woman supressed by the expectations of the patriarchy, and she does so with a kind of gleeful wickedness that is actually, a lot of fun.

Fun, also is The Love Witch in which writer/director/editor/producer Anna Biller (who also did production and costume design) has created a present-day scenario where young lovelorn witch Elaine (Samantha Robinson) is intent on embodying the ultimate male sexual fantasy. Using the aesthetics of 1960s sexploitation cinema and shot on 35mm, Biller envelopes the viewer in a completely realised, technicolour world, at once removed from, and inherently familiar as, ‘real’. Real in the sense that Elaine’s entirely constructed femininity, functioning to give pleasure to the men she gives her love potion to, is only a slight exaggeration from the everyday standard of beauty with which women are still conditioned to comply, as is demonstrable from Las Lindas.

Despite Elaine’s layers of artificiality and obliviousness, Biller is sympathetic to her brainwashed central character, making clear that it’s the men in her life who have led her to follow this path, and who will, finally and tragically, oppose her. Along the way, the sheer beauty and level of attention to detail in The Love Witch is stunning, and Robinson’s performance shows an astonishing commitment to the physicality of the role, which requires great restraint and poise (utilising her background in dancing). The Love Witch was a particular highlight of IFFR 2016 – a gloriously seductive feminist work, and a distinctly pleasurable viewing experience.