At Edinburgh Film Festival in 2012 I had the pleasure of meeting director Mania Akbari ahead of the European premiere of her film, One. Two. One (Yek. Do. Yek). Mania was polite, charming and possessed of a fiercely intelligent wit – as her beautifully accomplished films demonstrate. During her introduction to One. Two. One, Mania described her fascination with micro expressions – that the smallest facial movement or hair falling across the face could reveal so much about the inner feeling of the character. That One. Two. One is composed of mainly close-ups and two shots attests to this fascination, showing the full extent of each impressive performance, most notably Neda Amiri as central character, Ava.

Beginning in a skin therapy clinic where Ava is being treated for facial scars inflicted as the result of an acid attack, the film then consists of a series of conversations between people connected with her and the incident, including her friends, family, lovers, and the man responsible for the attack. Shots are still, with camera movement limited to panning back and forth between characters, oscillating between two points of view that gives gesture central prominence. Ava’s physical disfigurement is not the only damage that has been inflicted on her, as she feels deeply the pressure to hide her imperfection from a society that places a high value on a woman’s beauty. In the clinic her treatment is accompanied by advice and comments from friends, whilst visits to the Psychiatrist and fortune-teller focus on the anxiety of Ava’s dreams. 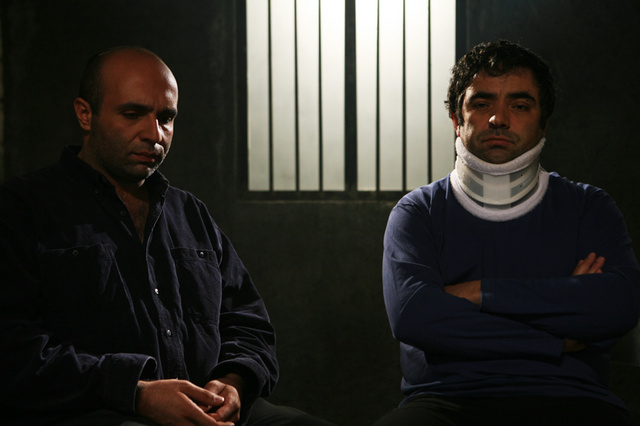 In Akbari’s From Tehran to London, another character (also called Ava and played by Neda Amiri) is seen with her husband getting ready in the bathroom, the repetitive gestures of grooming emphasised using close-up in the mirrors’ reflection. Both Ava and her husband, in this scene, tease and taunt each other in a playful prelude to the dramatic fall-out that awaits them. Here, Akbari focuses on female beauty in a film that uses the construct of marriage to examine gender inequalities in Iran. With One. Two. One gender is again explored, but the tone – established by the tightly composed framing and still shots – is more sombre, exploring deeply the psychological implication of attempting to conform to acceptable standards of beauty whilst hiding half of one’s face.

Now exiled from Iran following the making of From Tehran to London (the director fled in fear when members of her crew were arrested), Mania Akbari is the subject of a BFI retrospective that seeks to celebrate the outstanding accomplishments of this most courageous filmmaker. One. Two. One is unexpected pleasure, a moving, considered and important work, that benefits from repeat viewings.