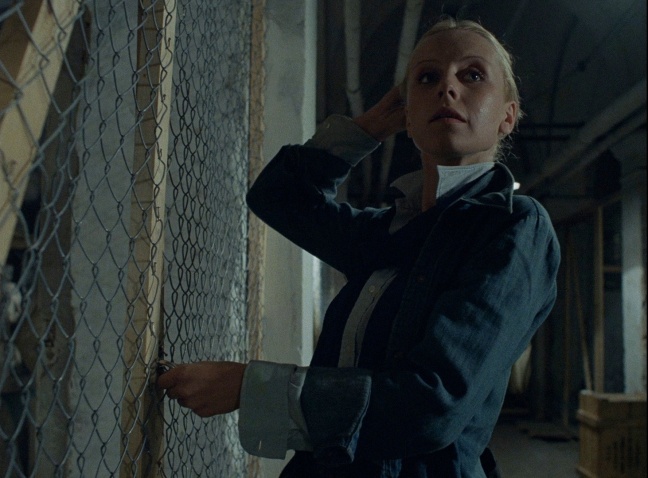 Andrzej Wajda’s Man of Marble (Człowek z marmuru, 1976) bursts with iconic images, costumes and gestures, from the poster-sized portrait of ‘worker’s hero’ Mateusz Birkut (Jerzy Radziwilowicz), to the blue denim worn by film student Agnieszka (Krystyna Janda), to the nervous, purposeful way she has of chain smoking cigarettes. That such images become so insistently memorable, is due partly to the way Wajda frames his characters and partly to the timeline of the film, in which Agnieszka – film crew in tow – charges around Poland in pursuit of the truth of the rise and fall of socialist hero Birkut, barely resting in the attempt to finish her diploma film despite the objections of her supervisor at the TV station. A filmmaker on a mission, Agnieszka is perpetually in blue, moving constantly forward, rarely seen without a cigarette throughout the film’s pacey runtime.

The origin of the film was a newspaper article seen by Wajda in the 1960’s, which described the plight of a working man unable to find employment, despite his previous status as a symbol of socialist labour, elevated to a standard of heroism by the State. Wajda asked Aleksander Ścibor-Rylski to write a script based on the article, but in the 1960’s the socialist project was seen as too risky a subject to tackle by the authorities and so work on developing the film came to a halt. It wasn’t until 1976 that Wajda was able to restart the project, with revisions to the script and the character of film student Agnieszka driving the plot forward, framing the story of investigating Birkut just as Thompson (William Alland) searches for the truth about Rosebud in Citizen Kane (1941).

Just as Agnieszka tries to find the person behind the image of Birkut, Wajda frames his female lead as an image – frequently at low angles as if to show Agnieszka as a towering statue – a symbol of passionate creativity in her blue denim uniform. Andrzej Korzyński’s soundtrack also goes a long way to cement the image of cool strength that Agnieszka embodies, with groove-heavy synths used heftily at moments when the young filmmaker’s purpose appears most clear.

The contrast between Agnieszka’s self-assurance and Birkut’s unassuming nature is one of the key points of focus in the film. Early on, we see the intrepid reporter viewing unused footage of Birkut shot by star filmmaker Burski (Tadeusz Łomnicki, also seen in Wajda’s Innocent Sorcerers) in which his discomfort at being filmed and naïve manner is a source of fascination for Agnieszka – perhaps perceiving this to be the defining characteristic that allowed him to be manipulated into representing socialist ideology.

Celebrated on its release in defiance of the censors that attempted to limit Man of Marble’s distribution, Wajda’s film appears today as a sharp critique of Stalin-era Poland, with a truly inspirational female lead, representing the filmmaking process as a fight for an autonomous voice in a male-dominated world, and the attempt to forge a formidable creative presence that might do justice to the idealism of her subject.

Beautifully restored for this release (restoration fans will note the image comparison feature on disk 2) by Second Run DVD, with fascinating interviews with the director, Krystyna Janda, and ‘unofficial’ assistant director, Agnieszka Holland. Fans of the damn catchy soundtrack might also note a new release on vinyl last month. 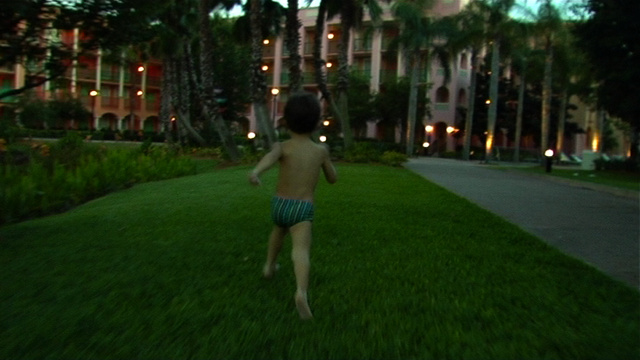 Ostensibly a home-movie portrait, Papirosen (the title refers to a Yiddish song about an orphaned boy who sells cigarettes to survive) becomes so much more than that. Carefully interweaving his own footage covering a ten-year period in the life of his Argentine Jewish family with that of Super 8 recordings stretching back to the 1960’s, Gastón Solnicki’s film reveals the intricacies of familial ties. Beginning with the birth of his nephew, Mateo, and documenting the small and big moments in his family members’ lives, Solnicki trains his camera on his family with so much love we sense that he doesn’t ever want to turn it off.

We are first introduced to the family members while they holiday in Florida: sister Yanina, mother Mirta, and, at the centre of it all, father Victor. A patriarch in every sense of the word, Victor exudes the air of a charismatic protector and stern authoritarian, one who dotes on his grandchildren and doesn’t mind scolding his daughter for her suitcase packing skills. Gradually Gastón’s continued presence (whether welcomed or not by his family) exposes the deep-rooted emotional scars left from the family’s experience as part of the expulsion of Jews from Poland during World War II. Victor’s mother, Pola, provides a voice-over that opens the film and continues at points throughout. At one point she wearily describes the outbreak of war: “After about half a year the Germans gathered people to take to the concentration camps… Treblinka, Auschwitz and many more I can’t remember. I was 16 back then.”

In one of many other arrestingly poignant scenes, a friend of Victor’s father breaks into song during a meal at a diner, provoking instant tears from the otherwise unflappable Victor. At this outpouring of memory and emotion, Mirta declares that her husband needs psychotherapy, if only to help him get over the death of his father, whom he says died of sadness.

Although the family gather for a formal dinner towards the end of the film, this is not the moment of catharsis that a more conventional documentary might build towards. Demonstrating himself as a sensitive and thoughtful director, Solnicki chooses a cyclical route, closing the film with a quiet scene between Victor and Mateo. Seen at the film’s opening in wide shot, and now in close-up on a chairlift heading upwards to snowy peaks, Victor sings to his grandson, just as his father did for him: “He is our Father, He is our King. Our Father Saviour.”

Papirosen was given a special mention by the International Feature Competition Jury at the Edinburgh International Film Festival 2012. The jury was headed by Elliott Gould and also included Lav Diaz and Julietta Sichel.

This text originally appeared in the EIFF Catalogue.

The first thing worth noting about Innocent Sorcerers is that it looks simply stunning. Transferred from a new high definition restoration, approved by the director, the image quality is crisp, the sound pitch perfect, showing off the film’s gorgeous greyness to full effect. The platinum crop of central character Andrzej (Tadeusz Lomnicki) literally shines with silvery greatness – signalling him as the hippest of the films cast of free-spirited youth. In a new interview the film’s director, Andrzej Wajda – he tells of how impressed he is with new restorations of his films, describing how he barely recognises them as his own work.

The freshness of Innocent Sorcerers is just one of the films many achievements; centring on the aforementioned Andrzej – a recently graduated sports doctor by day and Jazz drummer by night – Wajda depicts the life of the post-war generation in Warsaw. Untrammelled by a war they were too young to fight in, instead their rebellion is against the State’s imposed conformity and involves carving out a more independent lifestyle. Andrzej has seemingly no trouble finding female company but when his friend asks him to talk a woman on his behalf he is still surprised that Pelagia (Krystyna Stypulkowska) is willing to accompany him back to his apartment after she misses her train. Matching his attempts at seduction with quick wit at every turn, Pelagia is both charming and more mature than the women Andrzej is used to meeting. Deciding they should define the boundaries of their evening together, the two create an agreement of the night’s interactions and pin it to the wall.

Depicting young people in this way was not familiar territory for Wajda. In the aforementioned interview he describes the emergence of the Polish Film School, a term coined by French critics that came to represent the endeavour of directors, writers etc. such as Wajda to tell stories about only one subject – what they had been through in the war. Feeling the guilt of surviving when his friends did not, Wajda’s previous features, A Generation (1955), Kanal (1957) and Ashes and Diamonds (1958) are cited as his attempts to depict their experiences. The attempt to represent the current, younger generation did not come as easily however, and required the experiences of one such hip, emerging artist to inform the authenticity of Innocent Sorcerers – Jerzy Skolimowski. At the time he was an aspiring poet – hired to co-write the script, he also appears as a boxer, a sport for which he had particular enthusiasm.

Skolimowski’s small part demonstrates a vital energy – his is just one of many bright performances throughout the film and indeed leads Stypulkowska and Lomnicki have a chemistry that supports the majority of the running time. Pelagia, with a wry smile, enlightens Andrzej (or ‘Bazyli’ as he names himself as the beginning of their agreement) on the defining characteristics of their generation – that in all their assuredness; in fact they know nothing of the world.

The life of liberty that Wajda depicted on screen inevitably incurred demands for cuts from the censors. Perhaps most surprising is the offence they took to a scene in which Andrzej switches off his tape recorder with his foot. This seemingly small act occurs during one of many sprawling long takes, and in which we are introduced to the casual morning routine of our central character. According to Wajda, the censors found the use of the foot in the scene to be of utmost offence to the plight of the worker and that it showed ‘contempt to technology and labour.’

Innocent Sorcerers is a film constructed within its own cinematic world – opening on one of Andrzej’s lovers strolling in front of a poster for the film, we also hear a song on the radio announced as being from the hit film we are watching, not to mention a gorgeous close-up of the jazz club singer staring directly into the camera as she croons, “You enchanted my eyes, You enchanted my heart, Your sorcery Enchanted my world” – perhaps a delirious ode to the illusionist power of cinema.

Accompanying Second Run DVD’s release is a new essay by Michal Oleszczyk in which he notes that Godard’s Breathless (Á bout de souffle) was shot at the same time as Innocent Sorcerers  – a perfect coincidence of two films concerning ‘rebellious’ youth simultaneously coming to fruition, creating separate portraits of the French and Polish post-war generation. What a fantastic double bill that would be.