Jennifer Aniston – an actor seen frequently doing great work in poor films, sometimes excellent work in good films, and occasionally, amazing work in excellent films. How are we to know this prolific and skilled artist’s full range? We’ll just have to watch all of her films. After a hiatus, Aniston of the Week is back, and this time, it’s Marley & Me.

DIRECTOR: David Frankel
YEAR: 2008
SCREENWRITER: Scott Frank, Don Roos
CHARACTER NAME AND PROFESSION: Jenny, Journalist.
PLOT SUMMARY: Jenny is married to John (Owen Wilson), who is also an (aspiring) reporter. They move to Florida and buy a house. Jenny’s career is very successful, with her taking frequent trips abroad for work. When he senses she wants to have a baby, he’s encouraged by his friend to get her a puppy instead. They name the puppy Marley and essentially never bother to train him, so he constantly behaves erratically and wrecks their house. Instead of becoming a reporter, John writes a column, which features Marley heavily. Eventually they have kids and Jenny struggles with being a full-time Mum. They move to Philadelphia so John can be a reporter but he ends up writing a column again. The whole family loves Marley right until the end of his life.
CHARACTER TRAITS: Ambitious, intelligent, organised, patient. 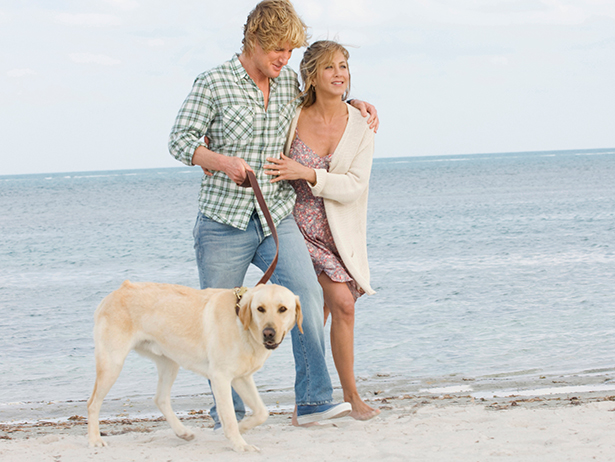 NOTES ON PERFORMANCE: A key moment here is Jenny adjusting to being a full-time mother, having previously been more successful in her career than John. Here, Aniston expresses the frustration of having seemingly conflicting feelings, of wanting to be with her children but feeling like she’s given up a part of her identity in order to do so. She’s angry, sad, frustrated, and showing all of it convincingly. It’s a shame the film doesn’t focus more on this struggle, seeing as it’s about the only real drama in the film.
NOTES ON FILM: A real comfort blanket of a film where essentially nothing much happens and a family live a fairly privileged life. Being from the male perspective makes it all the weaker – the film is based on the book from which the columns about Marley came. Still, Jenny’s identity crisis is so much richer than John’s – at one point she even declares how exhausted she is with his dissatisfaction, despite how full their lives are – but this is not given any further exploration. Ultimately it’s a weepy about a dog that teaches children about death.
CONCLUSION: Standard Aniston is a mainly supporting role. Given that one big scene to show her dramatic skills, but otherwise usurped by Wilson’s voiceover.

Jennifer Aniston – an actor seen frequently doing great work in poor films, sometimes excellent work in good films, and occasionally, amazing work in excellent films. How are we to know this prolific and skilled artist’s full range? We’ll just have to watch all of her films. After a hiatus, Aniston of the Week is back, and this time, it’s Mothers Day.

DIRECTOR: Garry Marshall
YEAR: 2016
SCREENWRITERS: Anya Kochoff, Matthew Walker, Tom Hines
CHARACTER NAME AND PROFESSION: Sandy, Interior Designer.
PLOT SUMMARY: Sandy is divorced from her husband Henry (Timothy Olyphant) with whom she amicably splits custody of her two sons. Sandy thinks there might still be a spark between them, but is surprised when Henry wants to talk and rather than expressing a desire to start again, he announces he has married a much younger woman called Tina (Shay Mitchell). Meanwhile, other characters such as Jesse (Kate Hudson) and her sister Gabi (Sarah Chalke) have secrets about their relationships that they’re keeping from their parents. Plus Kristin (Britt Robertson) won’t marry her boyfriend Zack (Jack Whitehall) because she’s adopted and doesn’t know her birth mother, and of course they all actually know each other or meet each other in the course of the film. Oh and Jason Sudeikis plays a man called Bradley whose wife died and he’s trying to raise two daughters.
CHARACTER TRAITS: Patient, kind, funny, anxious, frustrated.

NOTES ON PERFORMANCE: The usual poise, handling of pratfalls with ease and a familiar gently flustered frustration or being comically irate, or sweet and self-deprecating and making it all look easy, almost as if she doesn’t have to try. Aniston isn’t exactly being tested by the script though, which is very basic, moving through plot points as if it’s in a rush.
NOTES ON FILM: Well, it’s brilliant to see Aniston being a bit of goofball, expressing natural female rage and vulnerability, but the film is utter nonsense and frankly, racist in places. Kate Hudson’s husband Russell (Aasif Mandvi) is Indian, and her parents don’t know she married him because they’re racist, so how does the film deal with this? They make Russell’s Mum racist too, of course, so that’s all right then and we can all just get along and not really confront prejudice. Apparently the cast mainly signed on to do the film just for the chance to work with Garry Marshall (Valentine’s Day, New Year’s Eve, Pretty Woman) so they probably didn’t even see a script.
CONCLUSION: It looks as if Aniston liked this role for the opportunity to show vulnerability and anxiety, and issues of aging, and perhaps didn’t think about how the rest of the film is rubbish. An edit of just her scenes would be great, thanks.

This week, we take a look at Aniston’s post-Pitt break up movie, in which she stars with that loveable, fast-talking rogue, Vince Vaughn, as his exasperated partner.

DIRECTOR: Peyton Reed
YEAR: 2006
CHARACTER NAME & PROFESSION: Brooke Meyers, Art Dealer
PLOT SUMMARY: Brooke and Gary (Vince Vaughn) are in a long-term relationship. They live together in a comfortable apartment in Chicago. One day, Brooke becomes tired of Gary’s selfishness and immaturity, when he fails to support and help her in the preparation of a family dinner. Having been through the same argument several times, she decides to break up with him, hoping he will change his ways to win her back. Instead, on getting some pretty poor advice from his best friend Johnny (Jon Favreau), who immediately suggests Brooke is sleeping with someone else, Gary starts playing games in order to drive he rout of the apartment. Brooke retaliates with her own childish behaviour. Eventually they get to the heart of why they fell out, but by that time, they’ve hurt each other too much to reconcile.

CHARACTER TRAITS: Generous, sharp, resourceful, patient, impetuous.
NOTES ON PERFORMANCE: Aniston is excellent here. Brooke begins by appearing as a typical over-achieving woman, presented in broad strokes – taking the burden of creating a lovely home and maintaining a great career – but then a highly nuanced performance emerges. When Brooke eventually reveals her heartache, Aniston conveys her pain acutely, showing her struggle to communicate her true feelings in the face of such an overbearing partner.

NOTES ON FILM: What’s brilliant about The Break Up is that the drama is weighted equally between the two leads, so that Brooke’s internal life and Gary’s poor decisions are portrayed with equal sensitivity and humour. This is also clearly to aid the audience to ‘pick a side’ as the marketing so blatantly suggested, and to an extent Brooke and Gary can be seen a characters simply conforming to male and female conditioning. He’s boorish and self-absorbed, obsessed with getting a pool table, she’s complimented for her home decorating skills by her mother etc. There’s also a pretty silly last act reveal from Favreau’s Johnny, who suddenly comes out with the insight about Gary that would have been pretty helpful to him at the start, but hey, that would ruin the fun, right?
Also worth noting this is the third film we’ve seen Jason Bateman and Aniston appear in together (he plays the couple’s realtor).
CONCLUSION: A seriously good Aniston film, mostly well written and beautifully performed.