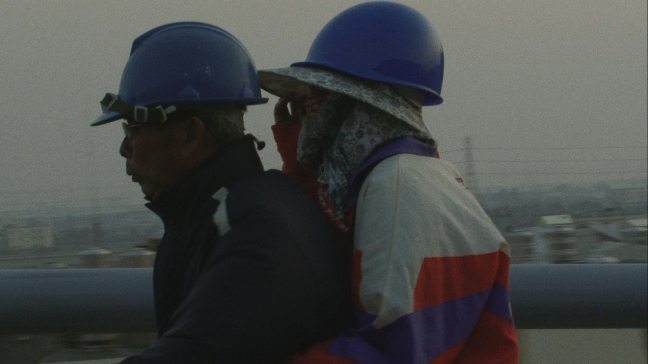 Following season opener, Man of the Story, LOCAL/LOCALE at the Edinburgh Film Guild continues on Sunday 15 November with the UK premiere of Georg Tiller’s White Coal (2015), a semi-fictional ‘document’ of the world’s largest coal-burning power plant in Taichung, Taiwan. Tiller based part of the structure of White Coal on Herman Melville’s novel The Confidence Man, and the film includes scenes, shot in black and white, that follow a figure aboard a Polish transport ship, much like the blind traveller of Melville’s tale. By contrast, the highly meditative scenes of the power plant were shot in colour, and it’s this contrast that is central to Tiller’s theme of factual distortion via image making.

Tiller investigates the common imagery of the worker and industrial work place – huge chimneys, imposing buildings, hard hats, control rooms – and how these tells us something and nothing about the place in which they’re located. Tiller’s intention was for White Coal to have a certain timelessness and refer directly to cinema, as he described in an interview with Olaf Möller; ‘in the Polish part, I wanted to create something like a certain historicity – so playing with images from the history of cinema. Some shots could just as easily have been taken from a 1920s silent film, or from Soviet industrial films. (My Russian editor said the images reminded him of the Georgian cinema of his youth.) Anyway, the point is to historicize everything throughout the entire film, you don‘t know in what era the film takes place, a patina of transience is stuck to everything.’*

The coal industry may be slowing down in Europe, but elsewhere it’s booming, and White Coal sits well alongside other recent works that have referred to extraction industries, such as Jia Zhangke’s Mountains May Depart (2015), JP Sniadecki’s Yumen (2013) and Wang Bing’s Crude Oil (2008), Coal Money (2009), West of the Tracks (2002) etc. The screening of White Coal also points toward week three of LOCAL/LOCALE and the work of Sasha Litvintseva, who also explores the imagery of industry.

Thinking about the use of colour and black and white, the appearance of the workers, the common motifs and the PR messages heard (which may or may not come from truths), provide a useful way to experience White Coal. It’s a very different film to Man of the Story but has in common with it a use of narrative (albeit much looser) to connect the social and the political.

Below is the full run down of the screenings in the LOCAL/LOCALE season and you can also join the facebook event here. EFG are offering mini-season tickets for £20. More info here.