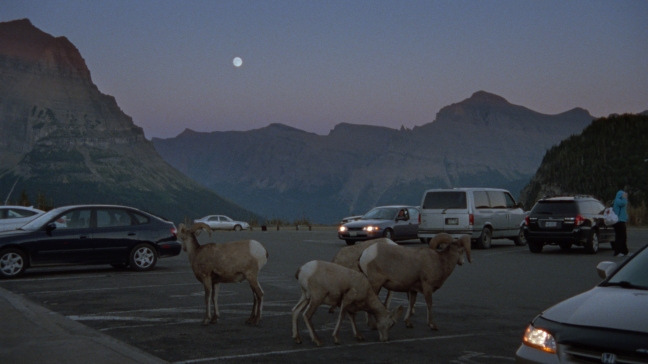 The final screening in the mini season LOCAL/LOCALE at Edinburgh Film Guild is the UK premiere of Britni West’s Slamdance award-winning Tired Moonlight. Set and shot in West’s hometown of Kalispell, Montana, Tired Moonlight uses mainly non-professional actors and a ‘documentary’ approach to capture the atmosphere of this simultaneously ordinary and special place. The director went back to Kalispell over the summers of 2012 and 2013, working from an 80 page script but with the flexibility to allow the performer’s own personalities and experiences to influence the film’s direction.

The film’s main characters are the poet Paul Dickinson, who plays himself and whose writing features in the film, and Dawn, played by Liz Randall, a woman who lives alone. Dawn’s ‘small’ story is essentially about the new connections she makes, first with a four year old girl and then with Paul, and Tired Moonlight relishes the awkwardness and vulnerability of opening up to others, within the a setting where it might be assumed that everyone knows each other.

Beyond this central conceit, West’s method while shooting was to allow the town to guide her in terms of what was important to portray, just as can be seen in the work of Miguel Gomes, in last week’s EFG screening Our Beloved Month of August and Arabian Nights. Says West; ‘We would see what was happening, who was around, try and figure out if there was something more interesting that we should be focusing on. It was loose, but also held together by this thread of my experiences, care for the environment in which I grew up, and love of the people I was working with and meeting along the way.’*

Shooting on Super 16mm, cinematographer Adam Ginsberg (Stinking Heaven, Nathan Silver, 2015) captures the beauty in the landscape and the small moments between people, making Tired Moonlight’s sense of place so evocative. The result of this looseness and beauty in shooting, the affection for the location, and a narrative lead by ‘real’ people is a film that succeeds so well in describing the experience of living in Montana, without treating those who do as curiosities.

Tired Moonlight screens at 7pm on Sunday 6 December. If you’d like more information about the whole mini season check out the EFG page here, or the other programme notes here on Cinematic Investigations, listed below.